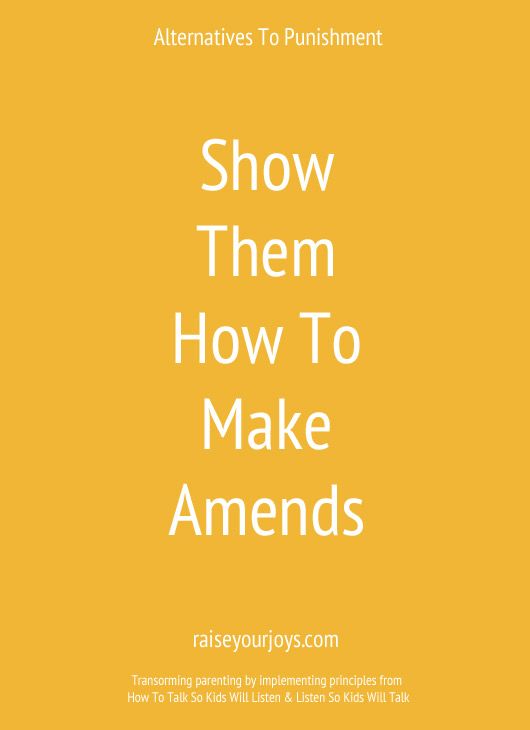 How To Talk So Children Can Listen & Listen So Children Can Talk presents seven alternatives to punishment that teach children what they should be doing instead of throwing the book at them for what they did do, which often turns a child’s heart to anger and revenge, exactly opposite of the connection and learning we want to occur.

One of those alternatives is showing how to make amends. In our home, each person is given one towel. It is their towel for bathing, swimming. I make sure it gets washed at least once a week, more often if it gets dirty or is taken to the lake. The children’s responsibility is to hang their towel on their hook after they shower, put it on the washer after they go swimming, and let me know if there is a problem with their towel – got throw up on it, food spilled, etc. Just yesterday we went to the lake and one of my children couldn’t find her towel. She looked and looked and looked, but couldn’t find it. I have extra towels for guests when they come, so I let her bring one of those, and told her, “This towel will cost you fifty cents since I will have to do extra work to wash it. Would you like to pay for it or would you rather go without a towel?” She decided to pay me for the use of the towel and we all enjoyed a pleasant day at the lake.

On one of my not-so-stellar parenting days, I might have said “What do you mean you can’t find your towel! You will have to stay home!” or “Well, you’ll just have to freeze at the lake – serves you right for losing it!”

Instead, I offered her a way to make amends. She can fix this situation by paying me fifty cents to use an extra towel. Her hope is not lost, she doesn’t need to move into a place of rage against me, and we all get to walk out the door happy and connected.

Another example is when a child breaks something. Instead of doling out a punishment, we can offer a way for her to fix it. She can either do the work of repairing the broken item or can do the work to earn the money to pay someone else to repair it.

Situation: child leaves dad’s hammer out in yard instead of returning it the garage.

Dad: Here is some steel wool. It will take some scrubbing to get the rust off, but you can do it. When you’re finished, here is some oil to rub on it to help protect it in the future.

Contrast that with a common scenario:

Dad: I can’t believe you left my hammer out in the rain! It is covered in rust! Don’t even think about using my tools again. You can go sit in your room and think about your behavior while you are grounded for the next week!

Child stomping off in a huff: Fine! You can keep your blasted tools! Why would I want to use them anyway!

The first situation builds connection between the father and child. It allows the child to make restitution and doesn’t label the child as irresponsible. It allows for problem-solving and keeps hope intact. The second situation harms connection and puts the child in a place of hopelessness. There isn’t any obvious way to fix the problem and being grounded will allow feelings of anger to fester until the next time a disagreement occurs.

Making amends is a powerful tool for healing – on the part of the child and the parent. Being able to repair what you have done heals not only the heart of the one in error, but those around them as well.

Classes and Consultation designed to Raise Your Joys